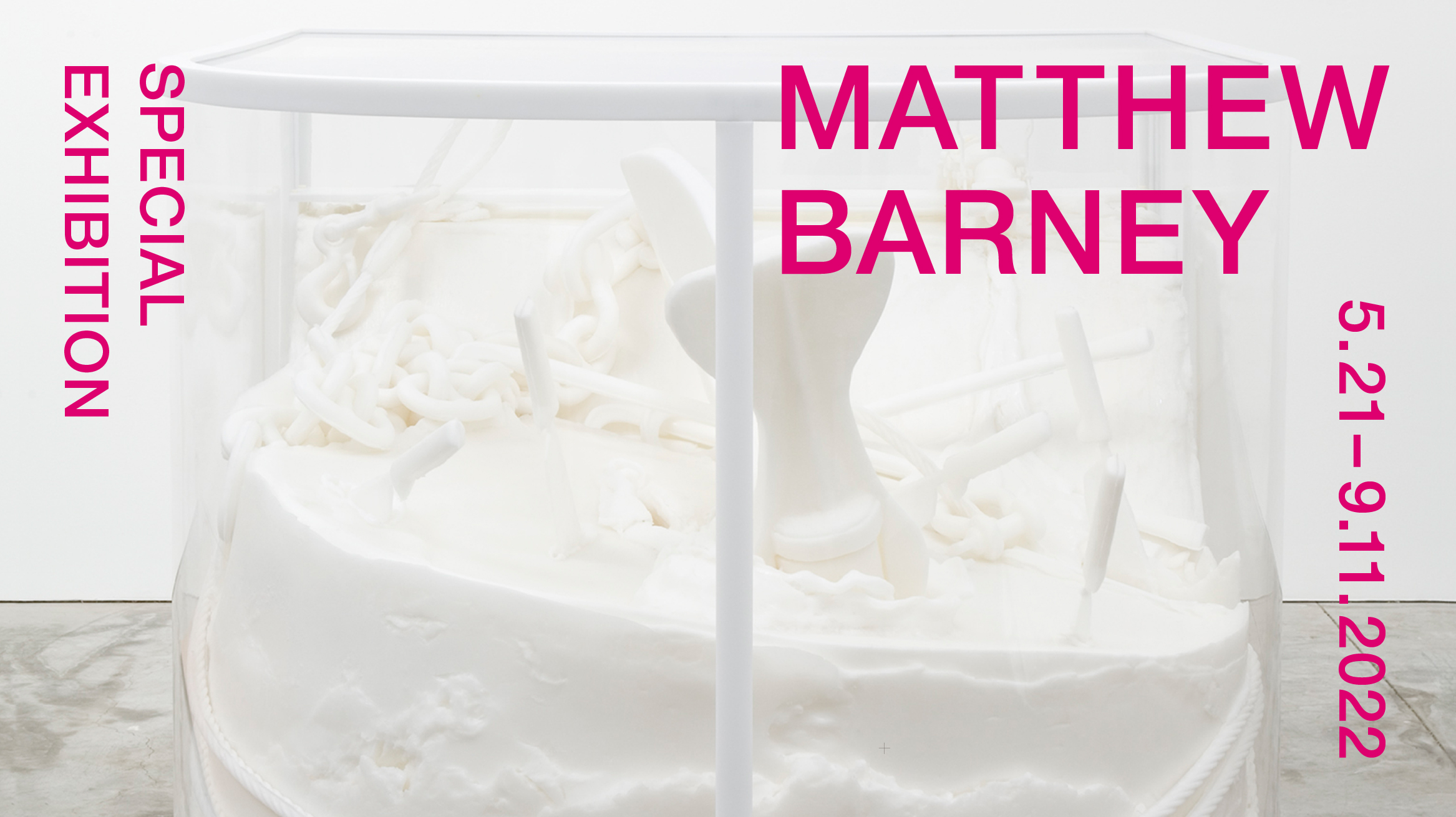 Matthew Barney is one of the world’s leading artists, embodying the 21st century with his endeavors to fuse physical and virtual-data sensation through intimately related sculpture and film practices. He has fascinated the contemporary art world since the 1980s with sculptures, films, performances, and works that integrate these media.
This exhibition primarily focuses on Drawing Restraint 9, the ninth work in the Drawing Restraint series which Barney launched in the late 1980s and which consists of films, drawings, and sculptures, along with related works that introduce the narrative, motifs, and characters of the series.
As a new installment in the Drawing Restraint series, Drawing Restraint 9 had its world premiere at Barney’s first major solo exhibition in Japan, held at the 21st Century Museum of Contemporary Art, Kanazawa in 2005. The work, which conveys Japanese cultural themes from whaling to the tea ceremony, unfolds in a variety of media including film, sculptural installation, and photography. Shot mainly in Japan, the film presents a distinct visual interpretation of Japanese culture. Icelandic musician Björk composed music for the film and the exhibition installation, and subsequent international tour.
As the title suggests, Drawing Restraint constrains the body during the act of drawing, and grapples with the unpredictable markmaking and forms that emerge from such restraints. Even 17 years after its release, the message contained in the work, which addresses issues of the human body and the world around it, the activity inside and outside the body, resonates as powerfully as ever with viewers today.

The film in Drawing Restraint 9 is without dialogue, and presents an operatic, abstract fairy tale comprised of imagery and music. At an oil refinery in Japan, a tanker carrying a large quantity of molten petroleum jelly arrives at a port where a huge industrial whaling ship is anchored, accompanied by a procession led by various animals and performers. Petroleum jelly is poured into a huge mold on the deck, and the surface of the petroleum jelly as it gradually solidifies over several weeks provocatively reflects the ever-changing state of the sea. Fabrication of the sculpture cast in petroleum jelly proceeds steadily through the use of whaling techniques and implements, and the story reaches a climax when the process of removing the mold commences against a backdrop of glistening icebergs in the Antarctic Circle. On the second deck of the ship a foreign man and woman dressed in traditional Japanese costume, played by Barney and Björk, are guests at a tea ceremony, and the time-honored and meticulous actions of the tea master continue as the two characters form a silent bond. As the ship sails on, the story comes to a stunning and dramatic conclusion when their figures slowly metamorphose into white whales.

Matthew Barney was born in 1967 in San Francisco, and lives and works in New York City. After completing pre-med studies at Yale University in 1989, he studied art and physical education. He became increasingly active as an artist in the early 1990s, and since his solo exhibition at the San Francisco Museum of Modern Art in 1991, has prolifically produced films, sculptures, and works in other media. His sculptures are often composed of unique materials, such as industrial reinforcing plastic and silicone, while his films create unique and profound atmospheres with deliberate pacing and sculpted sound. Among his best-known works are the films in the Cremaster cycle, which explore processes occurring inside and outside the body.
Barney’s accolades include the Europa 2000 Prize in the Aperto division of the 1993 Venice Biennale and the Hugo Boss Prize from the Solomon R. Guggenheim Museum in 2000. His work is in major public collections including those of the Dallas Museum of Art; the Museum of Contemporary Art, Chicago; The Museum of Modern Art, New York; Tate Gallery; the Whitney Museum of American Art, and the Solomon R. Guggenheim Museum. 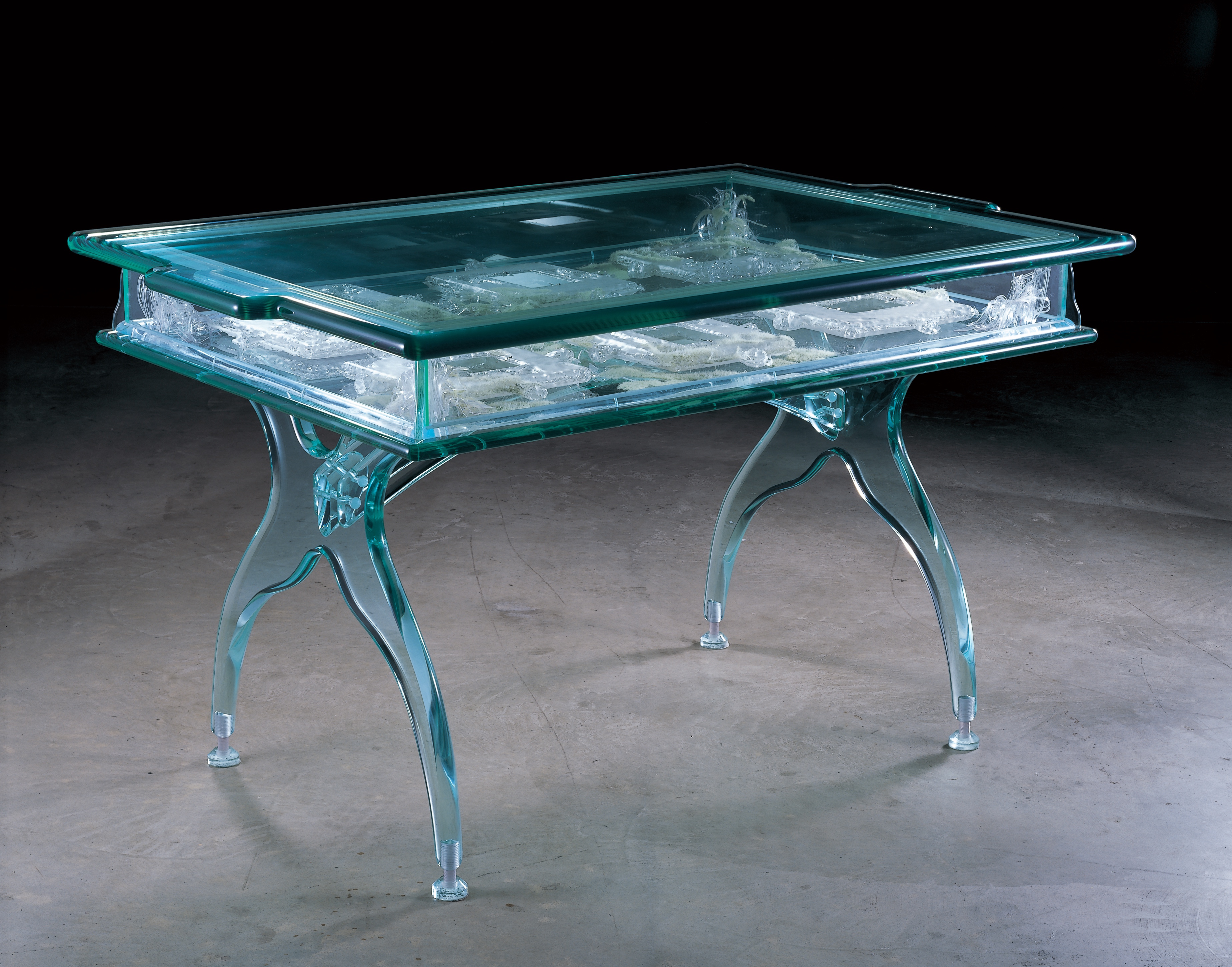 This work is a part of the major ongoing series “Drawing Restraint.” As indicated by the title, which refers to the application of restraint or restriction to the body while drawing, this series deals with universal themes such as the human body and the world that surrounds it, as well as with activity and energy inside the body. Inside a transparent acrylic case in the form of a table are a number of polycarbonate frames containing petroleum jelly, graphite and drawings, representing the split that occurs during the initial cell division after fertilization, or in other words the ‘natal cleft.’ The result is a profound work in which Barney’s unique sculptural language gives impetus to the magnificent world that unfolds from the tiny clefts. 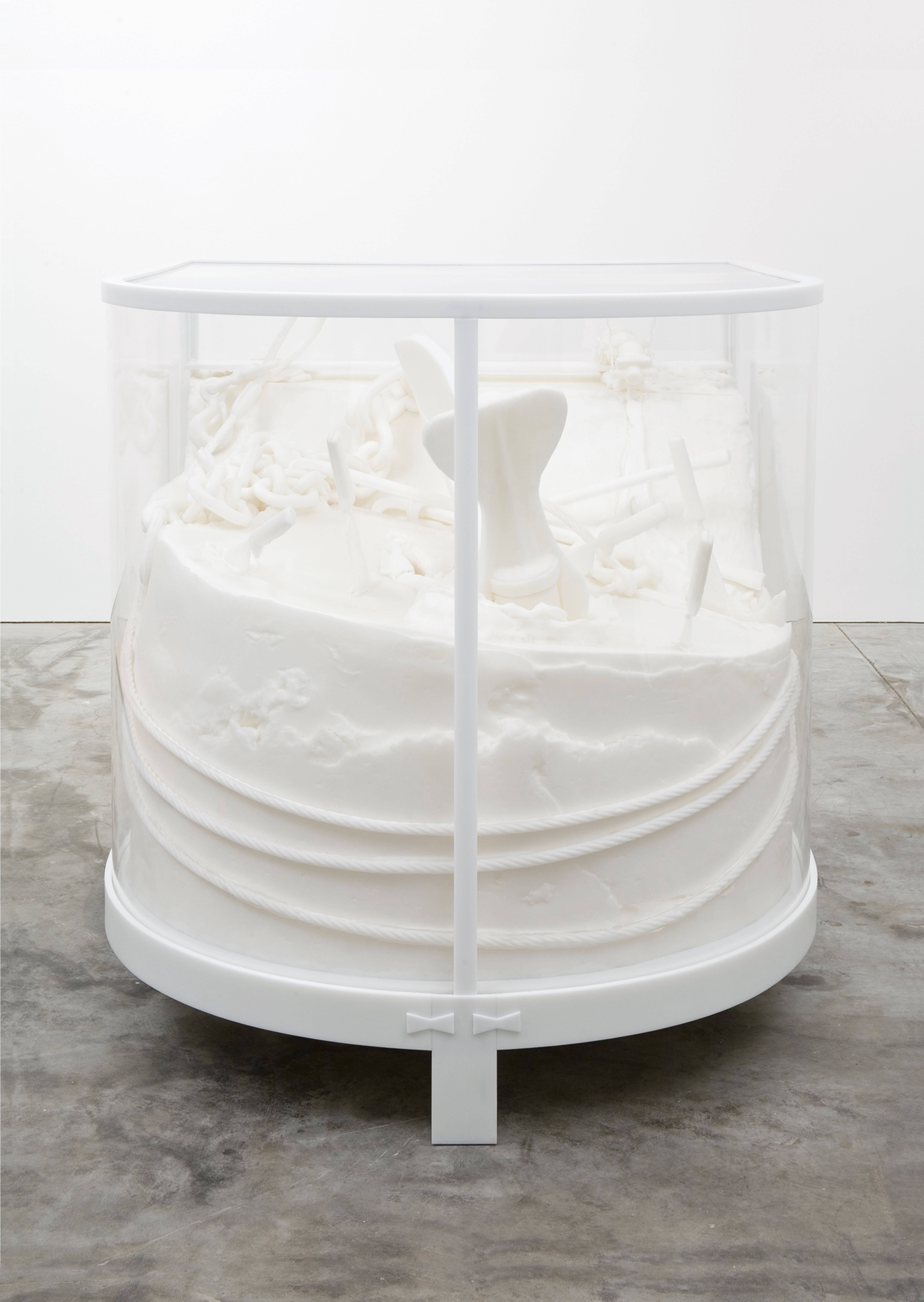 Works Related to Drawing Restraint 9
The Cabinet of Nisshin Maru

The Cabinet of Nisshin Maru consists of a glass vitrine containing a sculpted rendering, or portrait, of the whaling ship that is a central character and setting in Drawing Restraint 9. In addition to this work, the exhibition also will feature a suite of photographs depicting characters and specific scenes from the film.