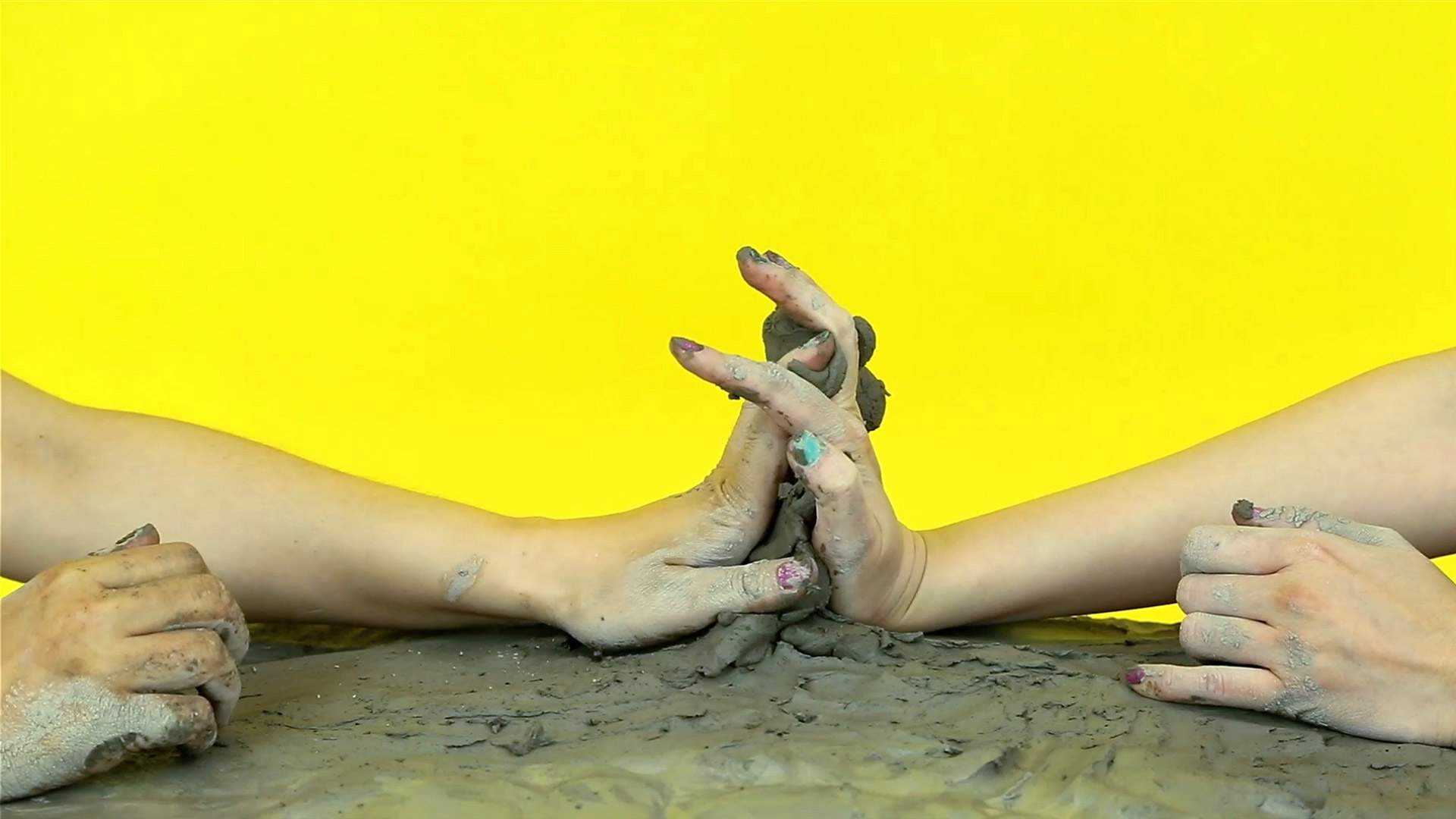 *Fees in parentheses are for groups of 20 people or more and web tickets
*Tickets for this exhibition include admission to the concurrently held “Countermeasures Against Awkward Discourses: From the Perspective of Third Wave Feminism” (October 16, 2021 – March 13, 2022).
*Tickets also include admission (same day only) to “Collection Exhibition 1: Inner Cosmology” (until November 3) and “Collection Exhibition 2: BLUE” (November 20, 2021 – March 13, 2022).

Feminism in Japan from the 1990s onward was linked to popular culture, focused on girls and young women in Europe and the US, and was disseminated through the media. Young women’s activities in Japan were also featured in the media, particularly a brand of feminism that became known as the “Girly Movement.” However, in Japan’s case it cannot be denied that in some ways the movement was less a call for change than it was fodder for the media, turning images of women into objects for consumption. Laws such as the Equal Employment Opportunity Act of 1986 and the Basic Act for a Gender Equal Society of 1999 were passed and a gender-equal society seemed to be on the way, but in reality there remained a pervasive sense of incongruity between the individual and society, as seen in the marital and family systems, social norms of heterosexuality, and conventions of femininity and masculinity.
Now, in the 2020s, social changes are stirring as small voices raising dissent connect through the Internet and gain strength. Feminism, which was thought of as only for women, is extending a helping hand to anyone who feels out of place in society. In recent years, the word has begun to be used in the plural form: feminisms. Ways of thinking about and understanding feminism differ depending on people’s generation and era, nation and ethnic group, environment and values. The message of pluralistic feminisms is the importance and necessity of members of society mutually acknowledging diverse ways of thinking. In this exhibition, works by nine artists, each with their own perspective, offer a window into expressions of feminism in Japan, and how artists perceive gender, the body, society, and what lies beyond. 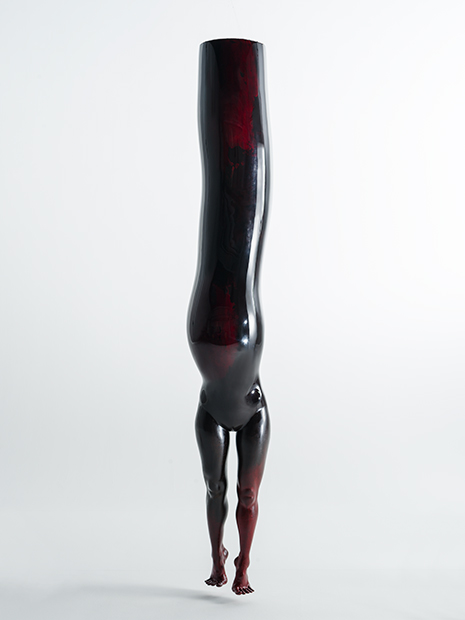 Born 1981 in Gifu. Aoki’s BODY series has the primal theme of confrontation with the subconscious. The deep, lustrous jet-black mirrored surfaces of her urushi (lacquer) works are reminiscent of smooth female skin, and the figures fused with abstract masses seems to be truly alive, beckoning the viewer’s awareness into the interior of the urushi. They express the existence of human beings who live powerfully and vigorously while bearing the burden of complex emotions. Major solo exhibitions include Shikkoku no Shintai, Hyogo Prefectural Museum of Art (2017). 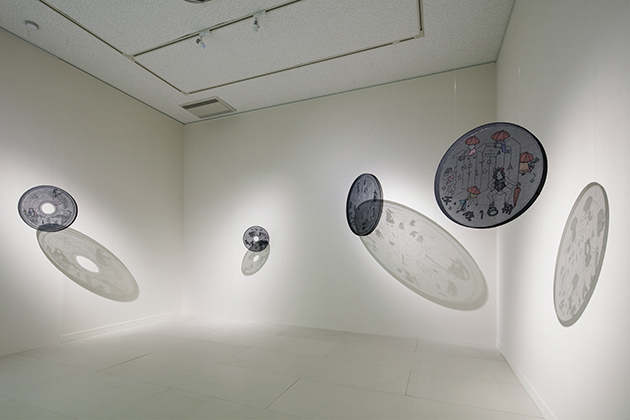 Born 1980 in Tokyo. Usui interprets events and history that have been forgotten or overlooked by society through in-depth research, creating works that generate relationality and critique through familiar techniques and materials such as handicrafts and fabric that have traditionally been regarded as “women’s work.” She won the VOCA Award in 2018. Major solo exhibitions include shadow work, Oyama City Kurumaya Museum of Art (Tochigi, 2016). 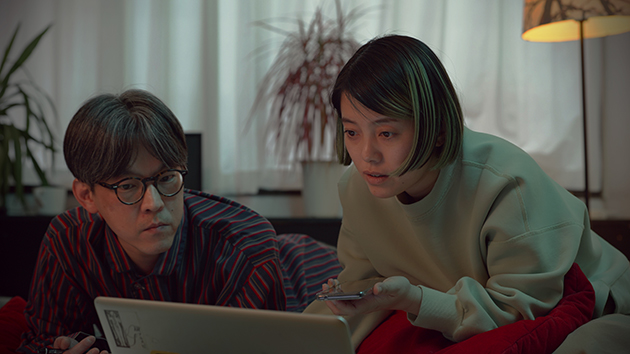 ENDO Mai, I AM NOT A FEMINIST!, 2017/2021
Creating the marriage contract with MORI Eiki
at the Goethe-Institut Tokyo
Film still : FUJIKAWA Takashi, KOYANAGI Tao

Born 1984 in Hyogo. As an actor and visual artist, Endo’s playful practice incorporates talking, DIY, and acting through the vehicle of her body. She focuses on the marital system and sexual and gender norms, and frequently collaborates with others. Major exhibitions include Rules?, 21_21DESIGN SIGHT (Tokyo, 2021). In 2018, she and MARUYAMA Mika founded the queer/feminist art zine Multiple Spirits. They investigate relationships of influence between Japanese shojo (girls’) culture and queer/feminist activism, and held the exhibition When It Waxes and Wanes in Vienna in 2019. 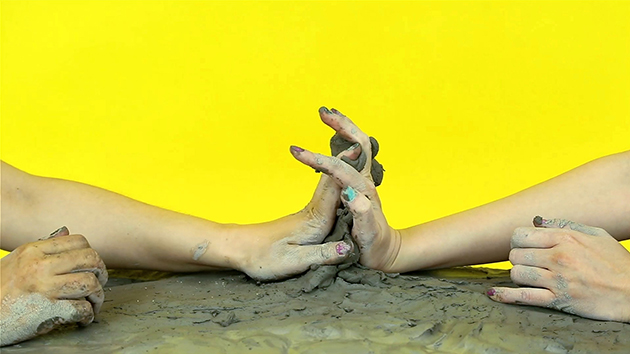 Born 1988 in Tokyo. Momose re-examines asymmetries of seeing and being seen, speaking and being spoken about in the moving image, creating video and performance works that explore divergences of voice and body and question social structures and norms centered on the visual. Recent major screenings of works include the 13th Yebisu International Festival for Art & Alternative Vision: PROJECTS: Retouch Me Not, Tokyo Photographic Art Museum (2021). 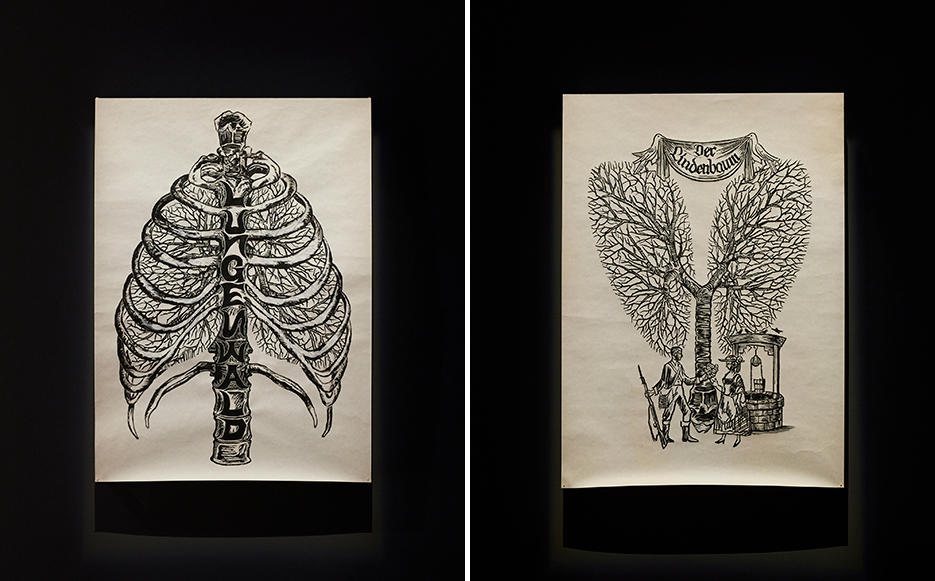 Born 1972 in Tokyo. Kazama’s black -and-white woodcut prints shed light on dark corners of the present and its underlying history, drawing on her original research into online discourse and old documents and materials, and capturing the past, present, and future in a single frame. Her comical and cynical works reflect the mentality not of a member of society, but of an outside observer lacking a fixed identity. She won the Tokyo Contemporary Art Award 2019-2021 in 2019, and her work is in the collection of The Museum of Modern Art, New York (USA). 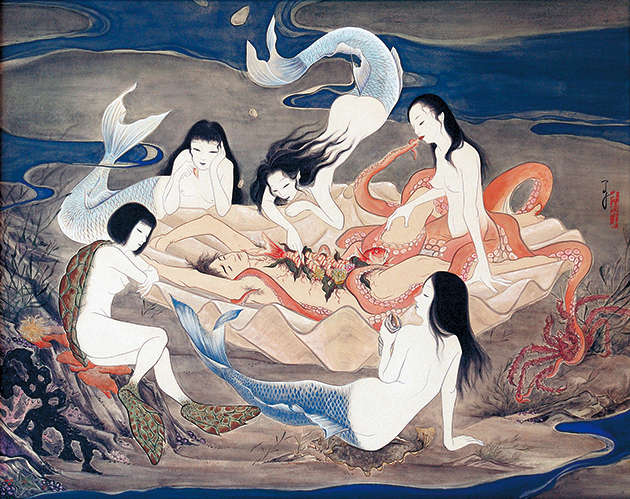 Born 1971 in Kyoto. Interpreting East Asian images of the male figure as bijinga (lit. “pictures of beautiful people,” but traditionally referring to paintings of women), Kimura paints with a perspective that encompasses romance, love, and the sexual gaze from a heterosexual female standpoint. She explores the possibilities of contemporary Nihonga (Japanese -style painting), working in traditional styles such as yamato-e, Kano School painting, and hand-painted ukiyo-e. Major exhibitions include Imayo: Japan’s New Traditionalists, Honolulu Museum of Art (USA, 2016) and Shoto Museum of Art (Tokyo, 2017). 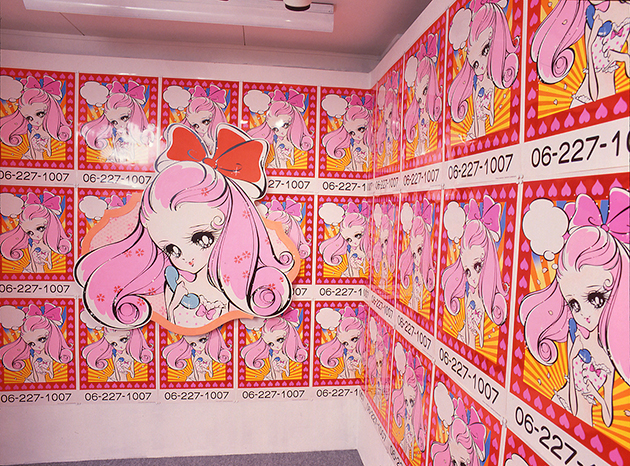 Born 1965 in Hyogo. Since the early 1990s, Nishiyama has revealed relationships between gender and consumption in Japanese culture by exaggerating visual tropes of shojo (girls’) culture such as the color pink, cuteness, and fragility. Major exhibitions include Knit Café In My Room By Mitsuharu Hirose and Minako Nishiyama, 21st Century Museum of Contemporary Art, Kanazawa (Ishikawa, 2009). Her work is in the collection of the 21st Century Museum of Contemporary Art, Kanazawa. 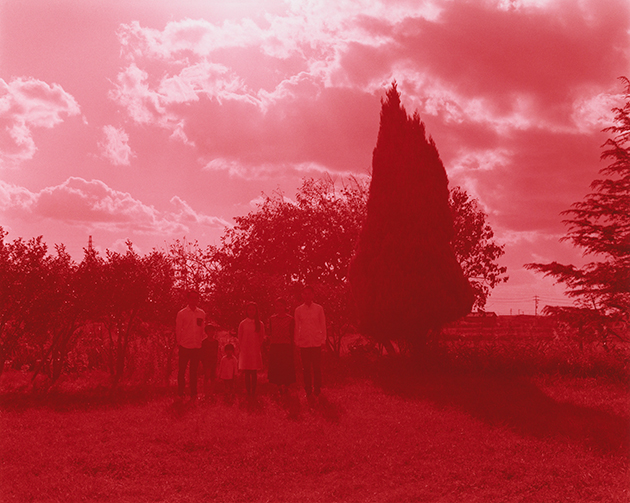 Born 1976 in Ishikawa. Mori works in various media including photography, video, performance, and text, addressing the subjects of sexuality and gender differences. He presents his own questioning of the present-day family in visual form through observation and participation, distilling social issues with a light and delicate touch. He won the Kimura Ihei Award in 2014. Exhibitions include Shibboleth—I peep the ocean through a hole of the torn cardigan, KEN NAKAHASHI (Tokyo, 2020). 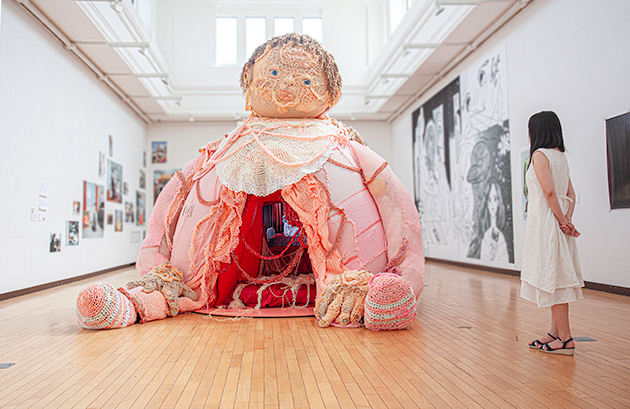 From Shizuoka. While engaging with aspects of Japanese otaku culture such as cosplay, pop idols, and BL (“boys’ love,” manga depicting male same-sex romance primarily targeted at women), Yuki focuses on filters (vessels for desire) that exist in the interzone between self and society, between fiction and reality, endeavoring to question and dismantle constrictive two-way relationships. She won the 21st Taro Okamoto Award for Contemporary Art in 2018. Major exhibitions include Listen to Her Song, The University Art Museum, Tokyo University of the Arts (Tokyo, 2020). 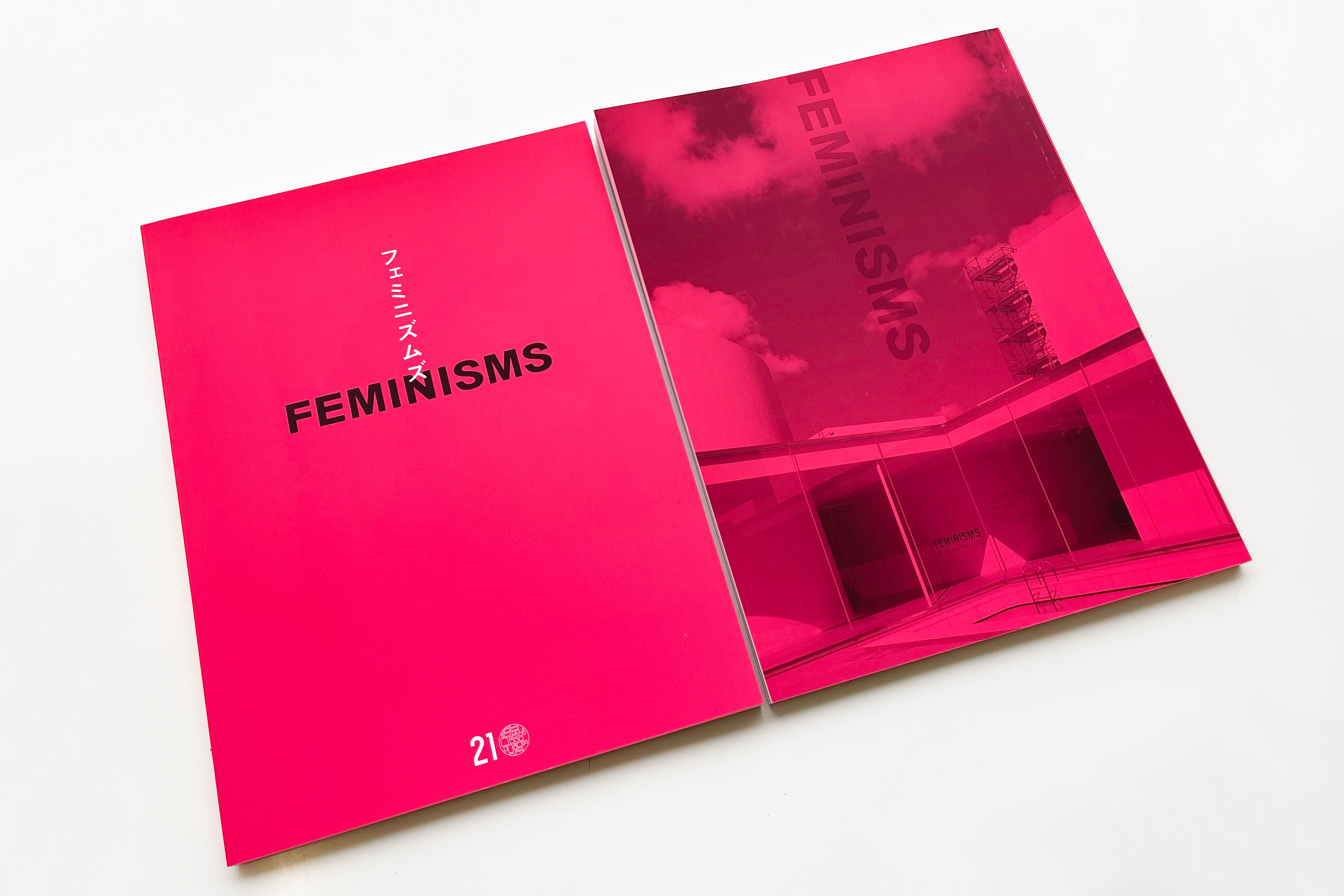