Where We Now Stand—In Order to Map the Future［1］ 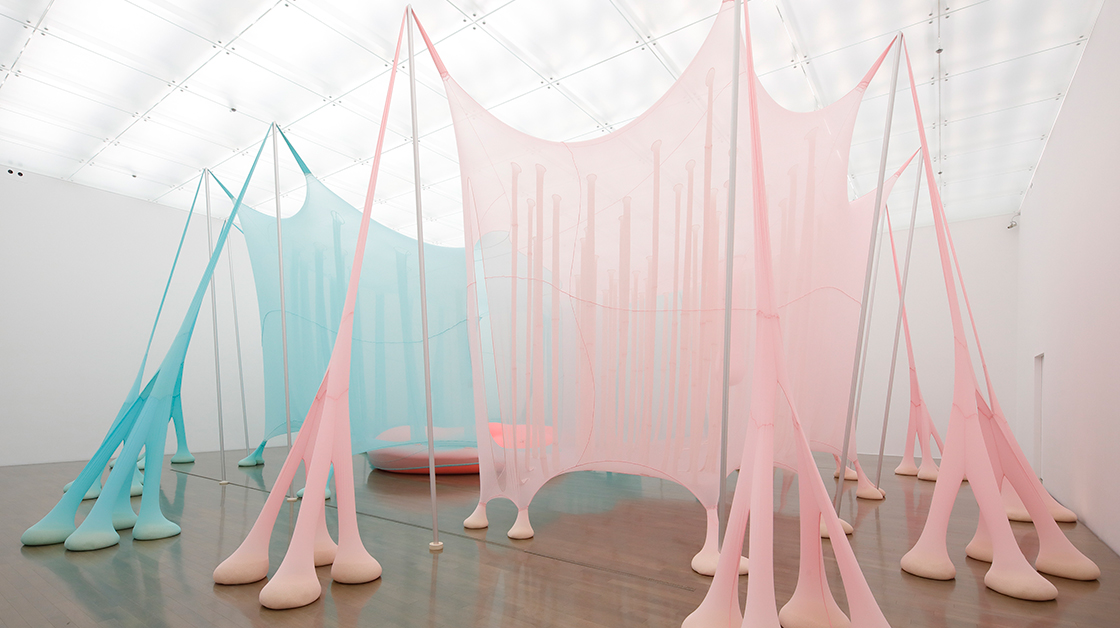 Now in our 15th anniversary year, the museum’s collection stands at 3,880 artworks—an achievement of the two decades since collecting began in 2000, prior to the museum’s opening. In those two decades, society has changed radically, a phenomenon the collection strongly reflects in its growing number of artworks sharply attuned to their times. This exhibition will reinterpret the collected works from the perspective of today’s issues so as to form a picture of where we now stand, in a complexly diversifying world, and begin sketching out a map of the future.

As layers of time, past and present do not always run parallel but, at times, entwine likes threads in a fabric. In MOON Kyungwon & JEON Joonho’s El Fin del Mundo, images displayed on dual screens depict two worlds—“the past” as seen in the activities of a certain male artist and “the future” visualized in a post-apocalyptic woman researching older civilizations. Through remnants of an artwork created by the man, the woman has contact with “the past.” In this work, the acts of “taking reference from the past” and “creating the future” are viewed in multi-layered time. The present where we now stand, being the intersection of the two time layers, harbors the possibility to become a nodal point for reference and creation. 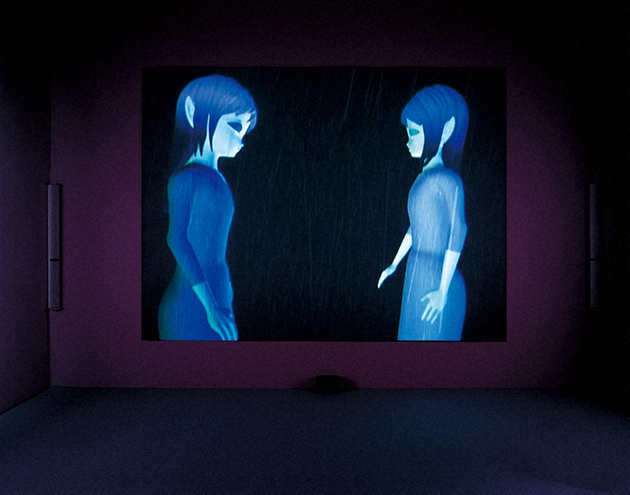 A special art project drawn from the unusual project “No Ghost Just a Shell” undertaken by French artists Pierre Huyghe and Philippe Parreno. Employing “Annlee,” a fictional figure purchased from a Japanese design company, the artists create a situation in which multiple creators work together indiscriminately. This special art project presents four pieces taken from their many complex “Annlee” creations. Each is a mirror reflecting a future enabled by the fusion of information engineering and life science, where “boundaries between concept and life are ambiguous.”

At the Intersection of Art and Biotechnology 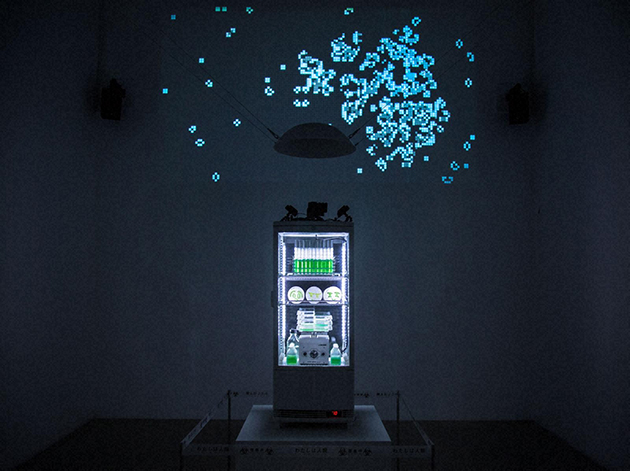 Like the television and Internet in past decades, revolutionary technologies emerging from biotech are opening up unprecedented possibilities for art. Technologies for reading and editing the DNA of life forms, debuting in the late 20th and early 21st century, are giving artists new expressive media. This gallery provides a partial history of BioArt interspersed with artworks from the museum’s collection. Consideration is also given to broader issues of biotechnology’s connection with political power and democracy and how it might shape our future. 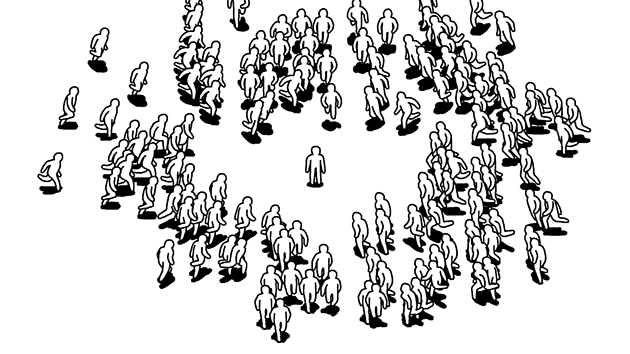 The growing game development environment and increase in online stores and other sales channels is altering the game manufacturing structure and encouraging the entry of developers from other fields such as animation films, contemporary art, and electronic music. Due to the increasing number of “individual” creators, video games now function as a metamedia promoting the critical re-examining of such media and rendering visible the heretofore invisible structure of the world inside games—their inner spaces and landscapes, and their autonomy and connection with the real world—thus arousing premonitions of greater
expansion hereafter.

A Time of Deepening Crisis

People of differing races, religions, values, and ways of thinking all live together in this world. Unless discriminatory views of race and gender are eliminated, there will be continuing poverty and hunger. Invisible borders exist everywhere and the harmful legacies of history seemingly defy solution, while endless conflict and destruction cast an immense shadow over the world. Meanwhile, advanced technologies are substantially altering human lifestyles and values, and pose the danger of regulating our lives in unprecedented ways. In these works, artists face the crises of our times and endeavor to find hope. 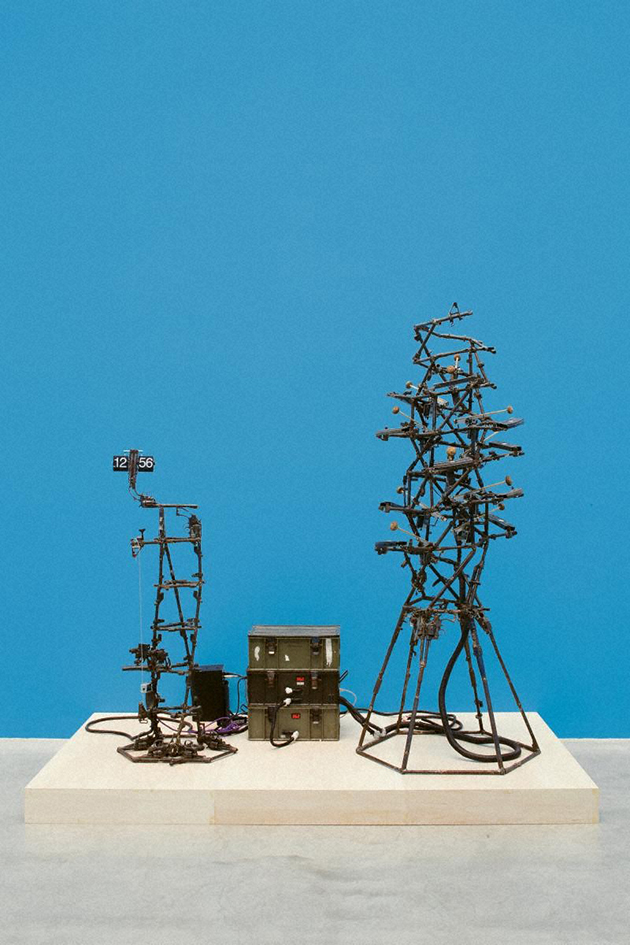 How do we get through our days, assailed by news of crises unfolding around the world? Pedro REYES, believing that global issues cannot be overcome by leaving them to experts and the existing nation-state framework, is proposing what he calls a “People’s United Nations” where regular citizens can meet and exchange opinions. To promote cooperation among different cultures, histories, wisdoms, and experiences, and seek creative breakthroughs would engender a truly democratic attitude. Even violence and destruction can be resolved if we
come together in solidarity and with humor. Ecology
The idea that people must avoid influencing nature, in atonement for polluting the environment, sees human existence as at odds with nature. In “Where We Now Stand,” however, humans are viewed as being an intrinsic part of nature, without boundary or confrontation. Nature is not so much quiet and beautiful as dynamic, uncalm, sudden, and ruthless. Judy WATSON incorporates organic materials from the earth into her work without a sense of boundary between herself and nature. TERUYA Yuken’s works created from newspaper accept the cruel conditions of
natural disasters while entrusting hope to the forthcoming buds.

Locality
While facts recognized in the sphere of public authority form the mainstream of history, facts pertaining to unrecorded places remain as fragments in fluid, open time and space. In Ibaraki, Japan, Tiffany CHUNG creates maps to express areas whose histories are voids, on the basis of materials kept in the Hitachi City Museum. In Africa, where parts from disassembled computers are collected for reuse, Elias SIME depicts African landscapes with electrical wiring that has lost its original meaning and function.

The Propagation of Energy 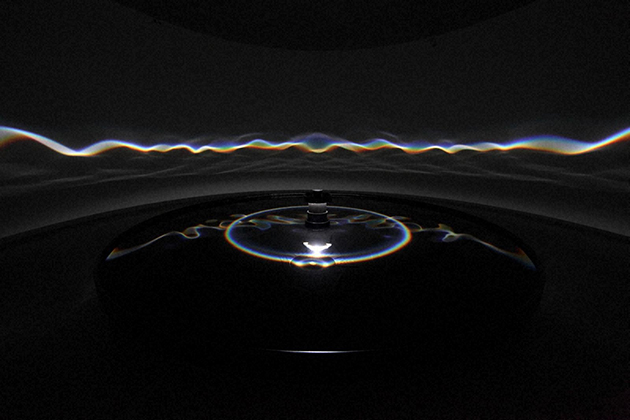 Interested in the way people perceive phenomena, Olafur ELIASSON explores the process of how a perception is formed, using light, water, color, and mirrors. He is also known for large-scale installations that transform entire spaces. Your watercolor horizon consists of an HMI lamp and a prism placed in a round vessel containing water. When a viewer steps on a pedal mechanism, a connecting hammer strikes the container, causing ripples to spread on the water. Because of the moving water, light passing through the prism projects a rainbow on the walls of the darkened gallery. This interactive work demonstrates the distinctive
character of Eliasson’s creations—the transformation of the work as a whole as a result of an intervening action. The world exists through “relationships.” Moreover, “relationships” give form to daily life. The artworks gathered here examine the myriad relationships between people, between things, and between people and things. In artworks that viewers transform with their involvement, Lygia CLARK examines relationships between people and things and draws attention to the environments of such relationships. Cildo MEIRELES created To L.C in response to Clark’s influence. If balls of different sizes and materials are held while wearing metal gloves, one’s tactile sense is
dulled so that the balls all feel the same. The artist, by upsetting a relationship fostered through experience, shows us that relationships are changed or updated by conditions and environments. SHIMABUKU’s Born as a Box features a box that talks about itself whenever a viewer approaches, while Gimhongsok’s This is a Rabbit presents a mute, unmoving rabbit whose true identity is revealed in text on a nearby placard. 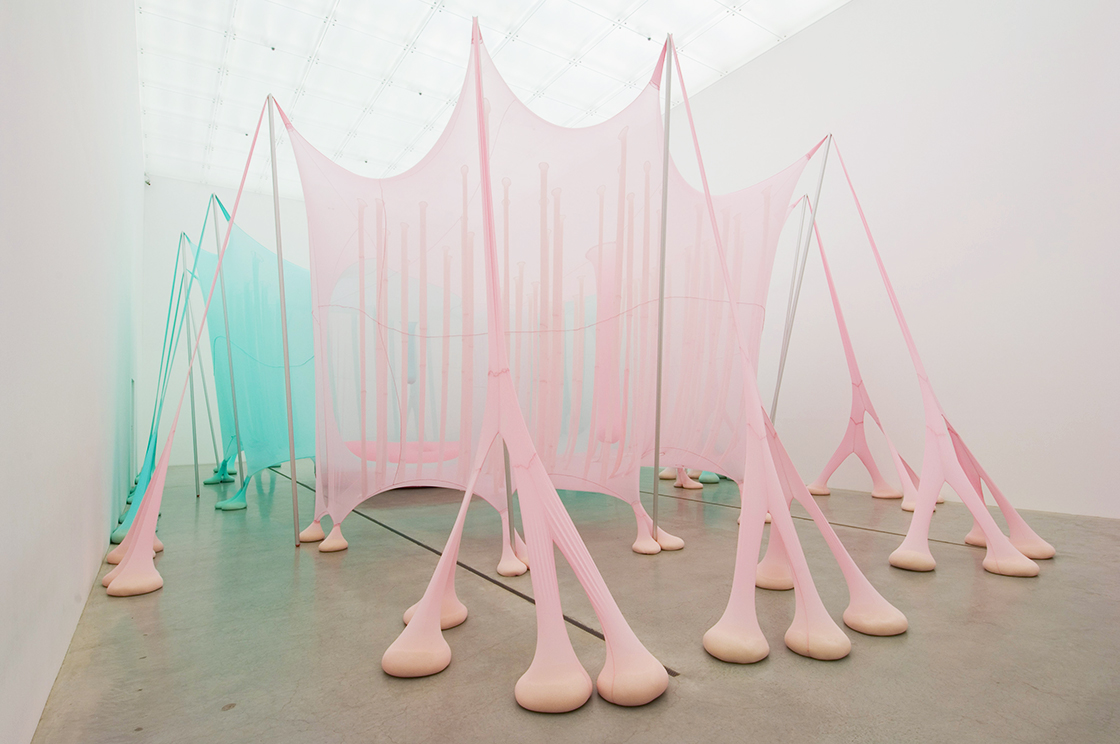 This gallery displays BODY SPACE NAVE MIND, a work by Ernesto NETO created of highly elastic “Lycra” cloth. Viewers, enveloped by pale pink and green membranes in an uncanny space, get a sense of having entered the interior of an organism. Enticed by the herbal fragrance coming from the central cushion, nevertheless, they discover it a space in which to relax and have dialogue with their inner self. 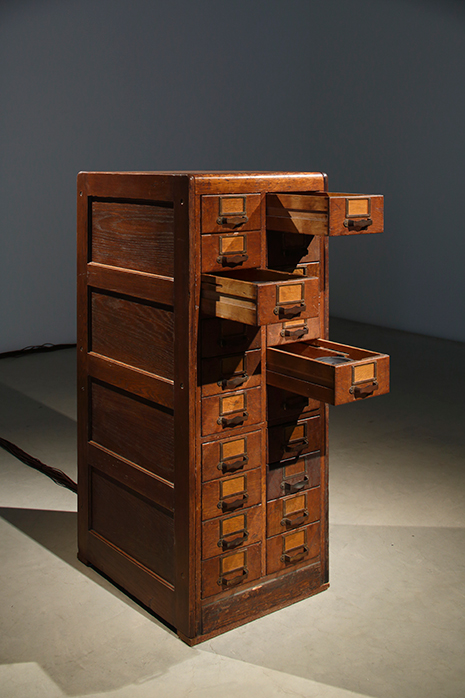 Music or someone’s voice—one of many sounds—begins to play when the cabinet’s small drawers are opened. Each drawer contains a different sound, and by opening and closing them, the viewer can use sound to
perform like a DJ. All the many sounds are sourced from the artists’ sound archive. This cabinet strongly resembles an art museum.
While carefully collecting and preserving artworks, the art museum takes them out at times for people to see. By variously combining the artworks, moreover, new values are indicated. An excellent collection can open the door to new creation.

TAKAYAMA Akira, leader of theater unit Port B (2002-), employs theater to transport viewers to thought-provoking spaces for examining the world. In recent years, seeking a quiet revolution, he has taken urban spaces themselves as his theater, presenting tour-performances and installations that unfold within everyday society. Takayama’s epic project “McDonald’s Radio University” imagines McDonald’s restaurants around the world as a university and deploys them in creating a “think-belt” providing people with inexpensive lectures. This time, a McDonald’s-like space where participants can order and listen to lectures will be created in the museum’s Public Zone. Immigrants and refugees from nations such as Indonesia, Taiwan, Iran, Syria, Ghana, and Japan will serve as instructors. The lectures cover philosophy, music, architecture, biology, natural science, journalism, and other wide-ranging subjects.