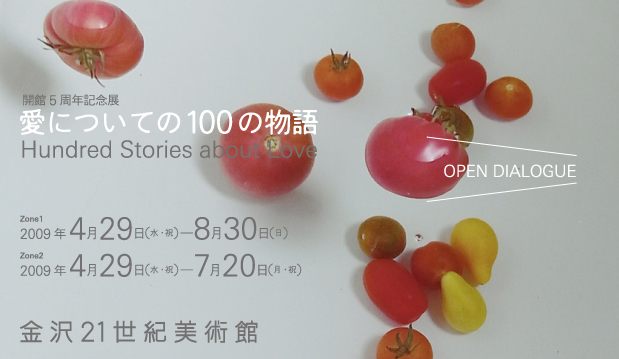 The year 2009 has arrived amid the turmoil of tragic war and a search for new values at the start of a new century. The world around us is changing at an ever-increasing speed. Meanwhile, injured in body and mind, hungry, thirsty, and wandering, we fulfill the tasks of living, as people have done since ancient times.
In our experience as human beings, there is perhaps nothing more mysterious than love. “The opposite of love is not hate but indifference and apathy,” philosopher Tetsuzo Tanigawa has said. During our brief lives, we have always found in love something to believe in. Then, there has perhaps never been a time like ours so badly in need of love.
This year, 21st Century Museum of Contemporary Art, Kanazawa will mark its fifth year. In order to create a forum for dialogue concerning love in its open system of galleries whose round glass walls promote transparency, horizontality, and multi-directionality, the Museum is transcending existing boundaries to invite the participation of researchers and activists in the realms of culture, society, and natural science, and that of creators in wide-ranging genres such as art, music, literature, and the performing arts.
The varied forms of expression appearing in the exhibition, “Hundred Stories about Love,” are waiting for someone at anytime to experience them, tell of them, and transform them. A story is no less than an “open dialogue” occurring at the scene of an encounter. The dialogue generated ceaselessly at the Museum will no doubt produce stories in rich profusion.
(Translated from Japanese: Brian Amstutz)