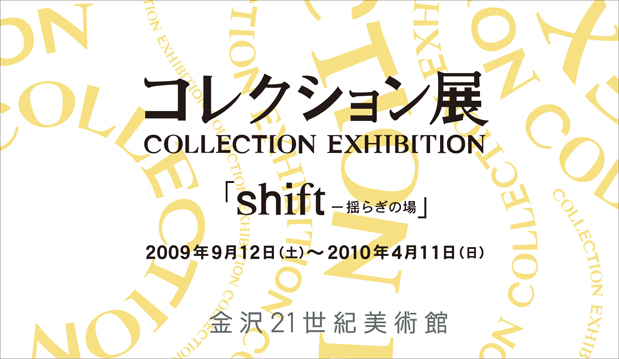 At some odd moment, something happens and suddenly a routinely familiar scene appears like a different world, filled with new meaning. To some extent, we have all experienced this kind of unexpected shift in our perspective or feelings. In contemporary society, overwhelmed by a perpetual flood of things and information, we grow numb in mind and body, and our thinking simply traces the contours of established concepts. What if we should stop, free our thoughts and perceptions, and look freshly at the world now before us and at the events of the past? What if we gave ourselves to the fluctuation and change in our own physical sensations, and to new perceptions and feelings? The works presented in this exhibition work on our sensibilities and promote such a shift in perspective, perceptions, and values.
Taking “Shift—Field of Fluctuation” as its keyword, this Collection Exhibition will give play to the unique features of 21st Century Museum of Contemporary Art, Kanazawa, which is currently marking its fifth anniversary. In glass-enclosed spaces permitting a soft permeability between interior and exterior—where the everyday and the unusual blend in unexpected ways—the exhibition will blur the outlines of things, including our own.

Artists in the Exhibition

Born in Antwerp, Belgium in 1959. Lives and works in Mexico City, Mexico.
After studying engineering and architecture in Tournai, Belgium and Venice, Italy, Francis Alÿs was dispatched as an architect to Mexico in 1986. He has since made Mexico City his home and the stage for his productions. Taking various approaches—performances, video, photography, painting, and drawing—Alÿs places himself in the urban environment as an active participant and employs the act of “walking” as his medium, method, and theme, and the foundation of his artworks. While responding sensitively to the situations and occurrences of everyday life, he abstracts and collects fragments of the city from an objective perspective. Although solitary in the extreme, his urban interventions are deeply concerned with contemporary social and economic conditions and human existence, and filled with movement, ambiguity, metaphor, and paradox. The narratives Alÿs thus depicts endlessly replay in varying forms in the viewer’s mind, like a parable or a rumor.

Born in New York, USA in 1943. Died in 1978.
Gordon Matta-Clark’s father was the Surrealist Roberto Matta. From childhood, Matta-Clark enjoyed close acquaintances with such artists as Isamu Noguchi and Marcel Duchamp. After studying French literature at Universite Paris-Sorbonne and architecture at Cornell University, he worked as an assistant to Dennis Oppenheim, then embarked on a career as an artist. Matta-Clark’s early efforts included varied performances that drew numerous other artists into involvement. He later moved to works in which he cut, removed and exhibited sections of abandoned buildings. These works he documented using photographs and video and actively showed in the form of artist books and other publications.

Born in Akita Prefecture in 1968. Lives and works in Akita.
In the early 1990s, Murayama Ruriko relocated from Akita to Tokyo, where she studied batik on her own while working in stage design. From the late ‘90s, Murayama began showing works created by cutting silk cloth dyed with chemical dyes into small pieces and painstakingly sewing them together. From the early 2000s, she embarked on the production of her “Collective Charms” series of objects covered lavishly with beads, pearls, artificial flowers, lace, and other materials obtained at handicraft shops. Her “Collective Charms” series works have gradually multiplied and mutated into bustiers, dresses, arm-shaped works, and other variations closely fitting the form of the body.

Born in London, England in 1960. Lives and works in London.
Peter Newman works in sculpture, video, photography, painting, and other wide-ranging media. Newman’s works include long, horizontal photos of smoke trails from unsuccessfully launched rockets, and video installations showing footage of a surfer who lost his life trying to ride a legendary colossal wave. Newman employs natural phenomena such as light, water, and sky together with elements of modern civilization such as airplanes and rockets. Giving play to our psychological perceptions of such things, he explores an unknown territory transcending space and time, while closely examining human existence in the physical world.

Born in Yamanashi Prefecture in 1969. Lives and works in Tokyo.
After graduating from Tama Art University, Suda Yoshihiro played an active role in the collaborative studio, Studio Shokudo, with a number of fellow artists until 1999. From the outset, Suda has undertaken exhibitions that install each artwork in a close relationship with the place where it is displayed—such as his placement of an artwork in a movable display, parked in a metered space on a Ginza street, in his first solo exhibition. Suda is currently creating minutely carved and painted wood sculptures of flowers and grasses, so realistic as to be mistaken for the actual thing. In the exhibition space, he installs these works in places easily overlooked or else places so obvious as to be unexpected, so that the viewer encounters them spontaneously with the fresh feeling of an act of discovery.

Born in Milan, Italy in 1974 and currently lives in Berlin, Germany.
Patrick Tuttofuoco studied architecture at Politecnico di Milano and fine arts at Accademia di Belle Arti di Brera. He creates sculptures with fluorescent tubes and plastics, installations with sound and light interlocked with each other, video installations, interactive machines, and so on. He is one of the most visible, highly rated young Italian artists. As he is interested in techno music, games, and urban life, his works show what is common to them all─a sense of speed and playful touch. Recently he traveled in Asian countries and North and South Americas for three months, and he has presented a work based on his diary, photos and videos accumulated through his observation of different cities and communication with local residents during his travel.

Born in Detroit, USA in 1949. Lives and works in Chicago, USA.
Using materials such as lace, linen, human hair, and thread, Anne Wilson skillfully employs the techniques of sewing, stitching, and tying in creating works that investigate human perceptions and meaning as a culturally constructed linguistic norm. Her works range from panels, stitched into fabric using thread or hair, to large-scale sculptural pieces 10 meters wide and video and photographic creations. Working with her hands, Wilson creates a dense, eloquent world by interweaving the emotions awakened by her materials—which richly evoke privacy and the body—with our memory of the functions they originally served and the complex, delicate textures produced by her use of pins and bits of thread.

(November 21, 2009 - March 22, 2010)
Born in Copenhagen, Denmark in 1967. Lives and works in Berlin, Germany.
Olafur Eliasson is internationally known for his skillful use of color, light, mirrors, and natural phenomena such as fog in works that delve into the workings of human perception. While on one hand they have us consider the mechanics of perception, memory, and recognition, on the other they fill us with poetic warmth. Featured here is an Eliasson site-specific work, created to boldly capture and involve, at a fundamental level, the museum architecture. 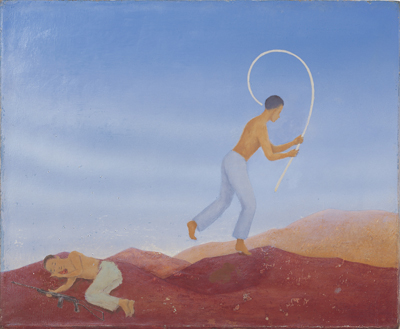 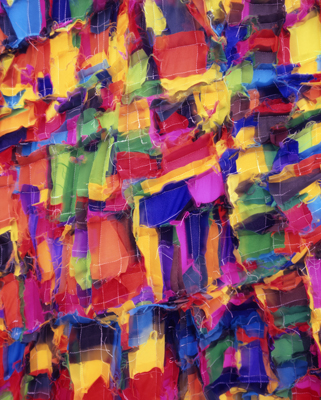 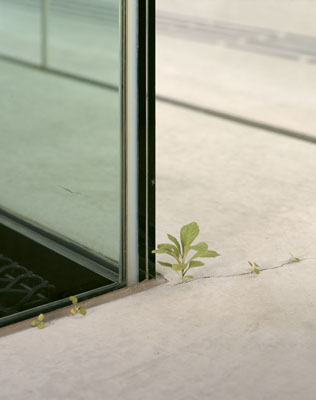 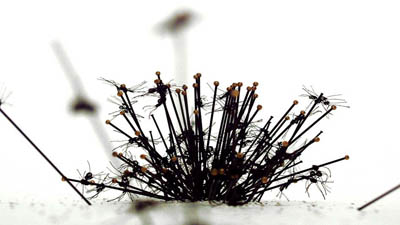