Calligrapher Koji Kakinuma—born in 1970, lives and works in Tokyo. At five years old he took up the brush, first under father, Suiryu Kakinuma, and later Yukei Teshima and Ichijo Uematsu. Asking "Is Shodo art? Am I an artist?" Kakinuma has continually pushed the boundaries of Shodo, the Japanese art of calligraphy.
Kakinuma brings to Shodo a contemporary vision grounded in tradition. He probes the principle of calligraphy in an endeavor to see calligraphy as a contemporary art form. "Inhale, exhale—use the brush freely!" is the figure of calligraphy he aspires to.
Kakinuma’s expressive style takes many forms. "Rinsho" (brushing after a model) is a platform for dialogue with master calligraphers and people of the ancient past. "Encounters"—an offshoot of Rinsho—are his interpretations of others’ words in the Kakinuma style. His "super-large-scale works" are pictorial investigations using charcoal ink. Then, there is "performance," where he shares the creative process with an audience, "trancework"—countless repetitions of simple, powerful phrases, and "installations" that give temporal and spatial development to calligraphy on grand scale.
The calligraphy of Koji Kakinuma is thus an "art of today" that draws from calligraphy, contemporary art, and sub-culture. It is calligraphy of hope that looks to tomorrow. It is calligraphy of possibility, free and open to the future. This exhibition will present the world of Koji Kakinuma through some 700 of his foremost works.

Born in Yaita, Tochigi prefecture in 1970. Took up the brush at five and studied under Suiryu Kakinuma (father), Yukei Teshima, and Ichijo Uematsu. Graduated from the Department of Visual and Performing Arts, Tokyo Gakugei University. In 2006-2007, worked at Princeton University as a visiting calligrapher.
Asking "Is Shodo art? Am I an artist?" Kakinuma has created a highly individual style, enabled by his command of traditional Shodo skills and avant-garde spirit. He is credited both in Japan and internationally with transcending the framework of calligraphy to create a new form of contemporary art.
His numerous awards include the Higashi Kuninomiya Prize in spring 2012, the 1st Yaita City Citizens Prize, the 4th Yukei Teshima Prize, the Dokuritsu Shotensen Prize, the Dokuritsu Shojindan 50th Memorial Award, and The Mainichi Calligraphy Exhibition Award (twice). He has executed the title artwork for the 2007 NHK Taiga Drama "The Warrior Ideal (Furin Kazan)," Kitano Takeshi’s movie "Achilles and the Tortoise," and Kadokawa Pictures movie "Saigo no Chushingura," as well as the gate nameplates for Kyushu University and Kyushu University Hospital. He has been featured in such programs as "NHK Top Runner," "Shumi Doraku," "Yokoso Senpai Kagai Jugyo," "Studio Park," MBS "The Passionate Land," NTV "Rock You," and a Bose TV commercial.
Kakinuma’s performances range from traditional calligraphy to dynamic large-scale works, using large brushes, and tranceworks. He has won international acclaim at the New York MET, Kennedy Center (Washington DC), Philadelphia Museum of Arts, London County Hall, and KODO Earth Celebration. He is currently president and a registered artist/calligrapher of Office Kakinuma Inc. 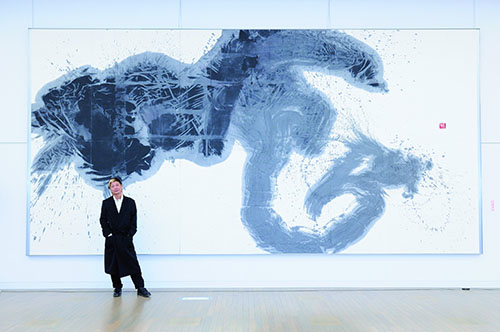 Patronized by：
THE HOKKOKU SHIMBUN