Having come to possess through the evolutionary process a massive cerebrum, homo sapiens also acquired the inner realm that is consciousness. Various borderlines exist in our society: between the self and others, national borders, and gender, to name just a few, but in most cases no actual line has been drawn. Rather a line has been drawn by people in their consciousness, and subsequently become institutionalized. Through the work of eight artists, at times confronting the borderlines created by human consciousness, at times traversing them, this exhibition explores the potential for people to expand the inner realm that is the self through contact with the outside, via borders. 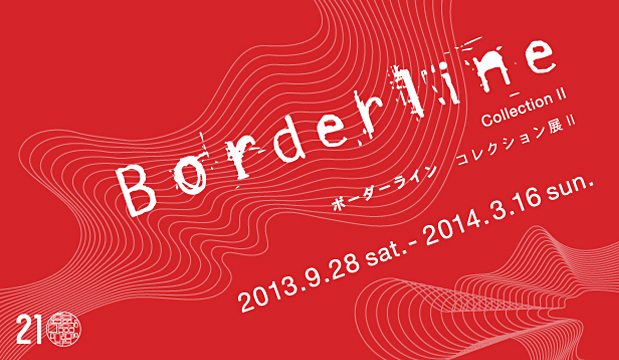 We differentiate between the internal and external in many different situations. Our interior is formed on the basis of common rules such as language, physical characteristics and memory, and friction and discord frequently arise between inside and out. Yet we find new rules for the internal and external, negotiating on the boundaries, which are continually being updated. Thus we could describe a border as a territory harboring the potential to expand the interior. This year's Collection Exhibition is an attempt from this standpoint to change our view of borderlines from one of division, to one of connection and expansion.
"Borderline Collection Exhibition I" took as its basis that which is most familiar to us – the body – and pondered the relationship between inside and out. "Borderline Collection Exhibition II" expands this to include social borders, in a showcase of works from the Museum’s collection.
Having come to possess through the evolutionary process a massive cerebrum, homo sapiens also acquired the inner realm that is consciousness. Various borderlines exist in our society: between the self and others, national borders, and gender, to name just a few, but in most cases no actual line has been drawn. Rather a line has been drawn by people in their consciousness, and subsequently become institutionalized. Through the work of eight artists, at times confronting the borderlines created by human consciousness, at times traversing them, this exhibition explores the potential for people to expand the inner realm that is the self through contact with the outside, via borders.

Born in Beirut, Lebanon in 1952. Lives in London, UK and Berlin, Germany.
Mona Hatoum was born to a Palestinian family who was exiled in Lebanon where she was raised. While on a visit to England in 1975, the outbreak of the Lebanese civil war prevented her returning home so she remained in London where she studied art graduating in 1981. Early in the 1980s she began making performance and video works that centered around the body. In the 1990s her work moved increasingly towards installation and sculpture using familiar household objects subverted into signs of ambiguity and threat. The personal and political are bound up in a narrative that explores identity and sexuality against a backdrop of traumatic social rupture, war, exile and displacement. (KC)

Born 1970 in Kamakura, Japan. Lives and works in Kamakura.
Kimura studied oil painting at an art academy but eventually changed to installations and three-dimensional work. He began exhibiting artworks from the mid-1990s and, from 1999, twice undertook art residences in Germany. Since his student days, Kimura has recorded his ideas and dreams in drawing books or on video as a source for the creation of art. His works, which employ familiar, everyday materials and situations, feature a blend of distinctive humor, amiability, and bizarreness that often induces visceral discomfort in the viewer. In this way, Kimura endeavors to communicate, directly to our physical sensibilities, the absurdity that underlies ordinary, everyday life and to reveal the true essence of things. (KC)

Born 1946 in Kanazawa, Japan. Currently lives in Kyoto.
Second-born son of teakettle artisan MIYAZAKI Kanchi XIII, Miyazaki Toyoharu graduated from the Kanazawa College of Art where he majored in sculpture. Strongly influenced by conceptual art, he began using a variety of different materials such as wood, iron, copper, and brass in his work. In 1979, he began a series titled "Personal Life Model," in which, centering on his own body, he incorporated ideas such as the size of different body parts, the environment and landscape surrounding him and his own personal memories, for which he attracted attention. "The Garden Below" series, begun in 1988, adopted the same form as "Personal Life Model" but created a much more profound world, the outcome of which was a universal representation of the memories of an extremely private artist. (YS)

Born 1957 in Qazvin, Iran. Lives and works in New York.
In 1974, Neshat arrived in the United States to study art and in 1982, received a Master’s degree in art from the University of California, Berkeley. Upon graduating, she moved to New York, which became the base for her art production. While on a trip home to Iran in 1990, she witnessed firsthand how dramatically her homeland had changed since the revolution and began producing work based on the theme of women in Iranian society. Her first photographic series, "Women of Allah" (1993), had martyrdom as its theme and depicted the love towards god and violence that dwell together in the female body. She transitioned to the medium of video in 1997 and presented multiple-screen video/sound installations. She was awarded the Silver Lion at the Venice Film Festival for her 2009 feature film, Women Without Men. (YS)

Born 1968 in Tokyo, Japan. Lives in Ho Chi Minh City, Vietnam.
Jun Nguyen-Hatsushiba spent a year living in Vietnam with his Japanese mother and Vietnamese father in 1974 at the end of the Vietnam War before returning to Japan. The family then moved to the US, where Nguyen-Hatsushiba graduated from art school. In 1997 he moved his base to Vietnam. With a strong consciousness of his own surroundings, Nguyen-Hatsushiba creates installations and video works using Asian foodstuffs and common items such as rice, mosquito nets, briquettes and cyclos. He gives expression to a world in which the everyday lives of individuals caught up in the political and social upheavals in the wake of the Vietnam War are complexly interwoven with their emotional turmoil, anguish, hope and lust for life. (KC)

NOTE: The exhibit of Memorial Project Waterfield: The Story of the Stars by Jun NGUYEN-HATSUSHIBA, which was scheduled from Thursday, January 2 – Sunday, March 16, 2014, has been postponed. The further information regarding the releasing date will be announced on our website. We apologize for the postponement and the inconvenience.

Trailer of Memorial Project Waterfield: The Story of the Stars

Born 1960 in Chelmsford, UK. Lives in London.
Since the mid-1980s, Perry’s work has, with his characteristic humor and fantasy and astute observations, dealt with the diverse themes of violence, prejudice, sexual oppression, culture, religion, and the meaning of self. The contemporary themes painted on the surface of classical-shaped pots and the multi-level intertwining of rich color and decorative elements of Perry’s ceramic works, for which he is mainly known, stimulate the imagination of the viewer. Perry’s practice has not been confined to solely ceramics; his work spans mediums ranging from sculpture, photography and prints to quilts and dress design, and he is also known for dressing as a woman. He has attracted a large following from around the world for the powerful content of his work. He was awarded the UK’s Turner Prize in 2003 and his first solo show in Asia was held at this museum in 2007. (YE)

Born in Kanazawa, Ishikawa, Japan in 1977. Lives in London, UK.
While at university, Sawa Hiraki produced works including sculptures that one could physically enter, later going on to make video works using computers. He extracts scenes from footage of his own apartment as well as of scenery from around the world, reconstructs them, and, using a computer, superimposes photographs of model airplanes, children’s rocking horses, birds, shadows, and the like to create a different space-time. This form of expression, which has a palpable warmth on account of the low-tech methods employed, projects an airiness and lightness as well as a unique eccentricity. In recent years a more sculptural spatial composition can be detected in Sawa’s work, including spatial composition in which a sculptural approach has been adopted in the arrangement of the videos, and the juxtapositioning of objects and videos, for example. (KC)

Born in Peja, Kosovo in 1970. Lives in New York, USA.
Sislej Xhafa grew up as an Albanian in former Yugoslavia, and is currently based in New York. While his wide-ranging activities cover photography, film, sculpture, installation and performance, he produces many of his works on such themes as immigration and moving, violence and power, prejudice and alienation; all are related to wars and sociopolitical situation in his native country. His style is marked not by direct criticism, but by humor, poetic contents and witty, polished way of expression, so that his works are open to multiple interpretations. He participated in many international exhibitions, and his works are highly recognized. (YE)