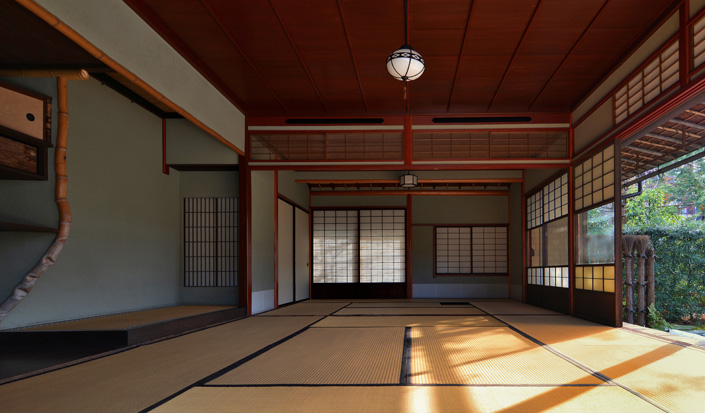 In the museum’s gardens stand two tea rooms, Shoutouan and San-u-tei, and a waiting bench (koshikake-machiai). These important historical buildings, closely associated with the Kaga Domain, are normally open to the public. They can also be rented for tea ceremonies and haiku gatherings, etc.

Mondays (When Monday is a national holiday, closed on the following weekday instead.)

This building was constructed in the late Edo period by Maeda Nariyasu (1811-1884), the 13th lord of the Kaga Domain, as the sitting room of his retirement villa, Fuyuen. It came to be called the “Red Room” because of the bengala (red iron oxide made by baking earth) that was painted on its posts and beams. After being moved to Kamakura and reassembled as a detached residence, it was later renovated as a freestanding tea room of the Sukiya style and named Shoutou-an by Maeda Toshinari (1885-1942), the 16th head of the Maeda Clan, in 1936. After being brought to Kanazawa City and reassembled in 1979, it was acquired by Kanazawa City. Shoutou-an is a valuable historical building that transmits the architectural tastes of the late Edo Period. In reassembling it at the Museum, effort has been made to maintain its atmosphere as such, and a mizuya (“preparation room”) and ryurei-seki (room for performing the tea ceremony using chairs) have been added.