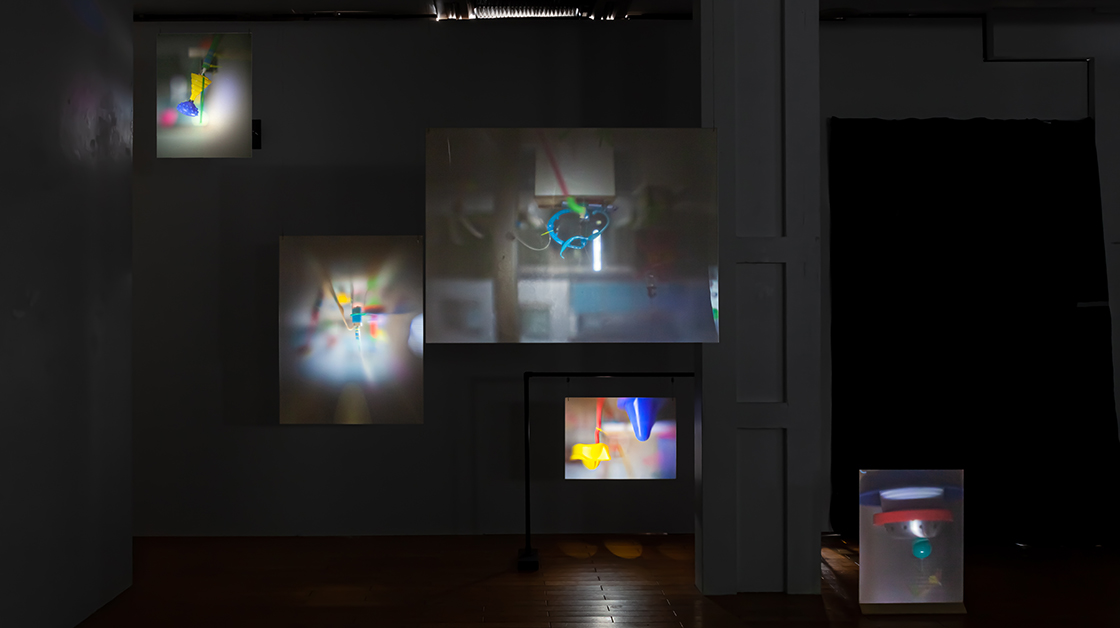 ANZAI Tsuyoshi (born in 1987) uses everyday objects as his primary medium, above all cheap plastic products consumed everywhere around the world. Removing their original function and meaning, he displays the plastic items as objects and compels us to question our interpretations of them and relationship with them.
Everyday objects that move in unexpected ways, sculptures created from plastic packaging normally tossed in the rubbish, and drawings that trace the outlines of plastic fragments... Anzai’s works, colorful and interesting to look at, strike us somehow like an extension of children’s play. Yet, to see familiar objects engaging in unfamiliar behavior evokes an eerie sense of disorientation.
The exhibition’s title “Poly-” derives from a prefix used in the names of several materials generically referred to as plastic: polyethylene, polystyrene, polypropylene, polyvinyl chloride, and so on. Besides meaning “many” and “multi-,” the prefix also indicates a condition of chemical molecules transformed (polymerized) into large single chain-like molecules. We may be aware such materials derive from crude oil, but most of us simply call them all “plastic” and use them every day without really understanding how they are made or the differences among them.
Today, while their volumes of consumption and methods of disposal pose grave problems in the world, plastics are so much a part of everyday life we can hardly imagine living without them. Anzai speaks of our relationship with plastic as marked by “a strange close-yet-far distance.” This exhibition will examine the uncertainty and incomprehensibility of society around us. 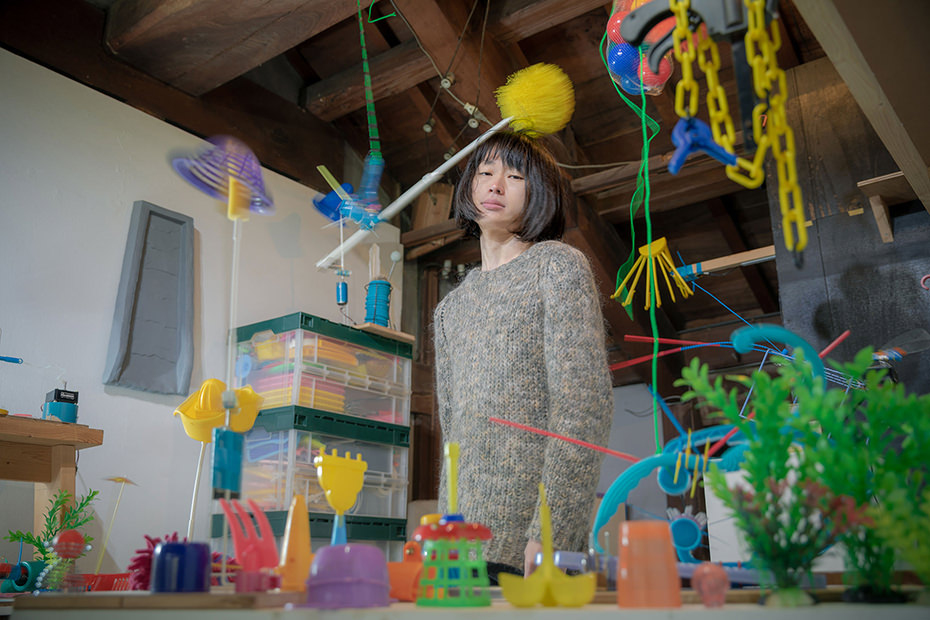 Born in 1987, lives and works in Saitama prefecture. Graduated with a Bachelor of Music at Tokyo University of the Arts in 2009. Earned his Master of Film and New Media at Tokyo University of the Arts in 2011. Anzai’s main exhibitions include “Being-in-the-Wired-World” (Kawasaki City Museum, Kanagawa, 2013), “Jailhouse Locke” (Daiwa Foundation, London, UK, 2018), “2016 Core Exhibition” (The Museum of Fine arts, Houston, TX, US, 2016), and “The Strange Objects” (Pohang Museum of Steel Art, Pohang, South Korea, 2017).

There is an ambiguous distance between plastics and humans.
Our lives are filled with things made out of plastics. But if suddenly we were in the world of dystopia or the planet of the apes, I’m sure I couldn't produce plastics from scratch. It seems unreal to me that plastic is made from crude oil through something like chemical reactions. Producing plastics is like a kind of magic in a fantasy world.
Currently, problems of ocean plastic pollution and CO2 emissions are growing serious globally. Some say it’s important to come to grips with those problems on an individual level. However, I need to order items for delivery on the internet and receive the medicine in a plastic package. And shelving the planetary problems, I worry over the urgent problem of finding an empty seat on a jam-packed commuter train.
We stand too close or too far from an object to see it properly. Although there might be an adequate distance between us and an object, it’s impossible to keep a decent distance from things forever. We have to construct our reality in motion by continually approaching and moving away from the objective world. 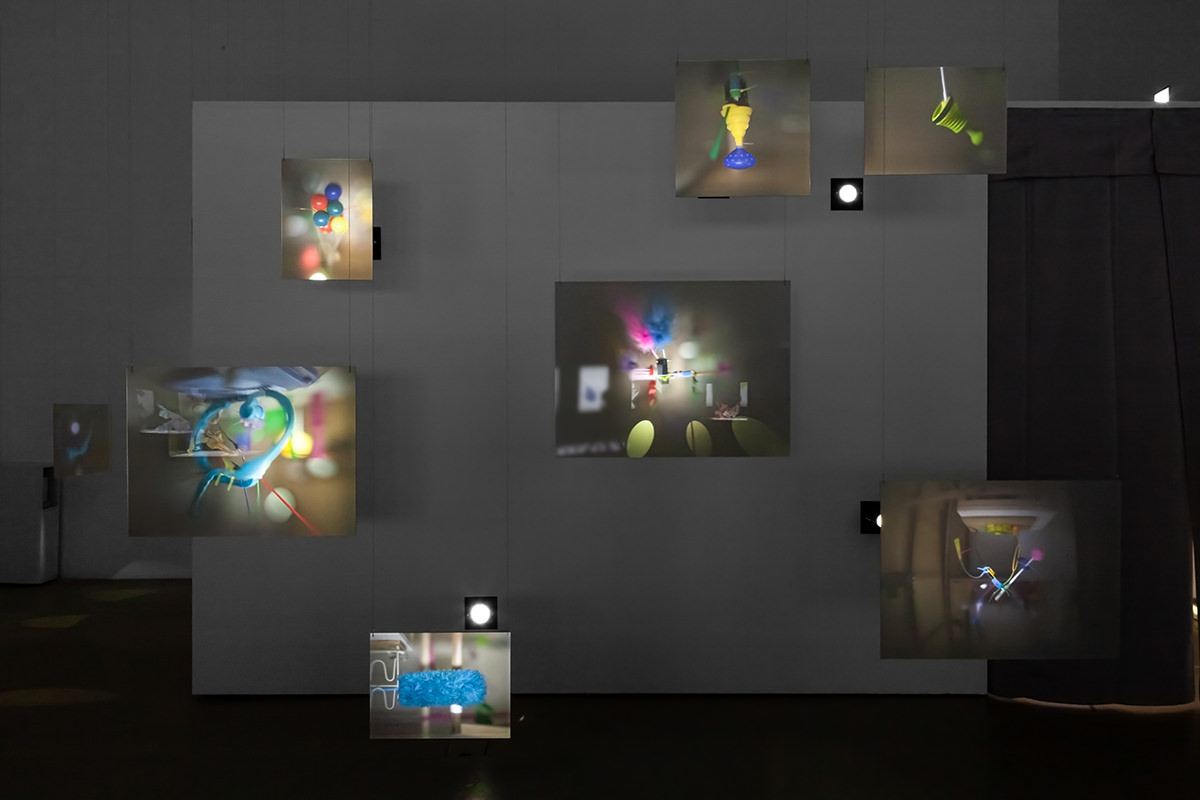 The images of the inside of the room are physically projected on screens using the mechanism of camera obscura. In the room, there is an installation of kinetic sculptures consisting of everyday items and motors.
The kinetic sculptures move clumsily and their motion makes the viewer sense them to exist as living creatures, even though the machines are inanimate objects. The objects are in fact there in front of them, but viewers, like prisoners of Plato’s Cave, can only see the objects as illusory video images. Anzai attempts to disrupt the way we unconsciously and passively perceive representation by creating a state where the object is suspended somewhere between reality and illusion. 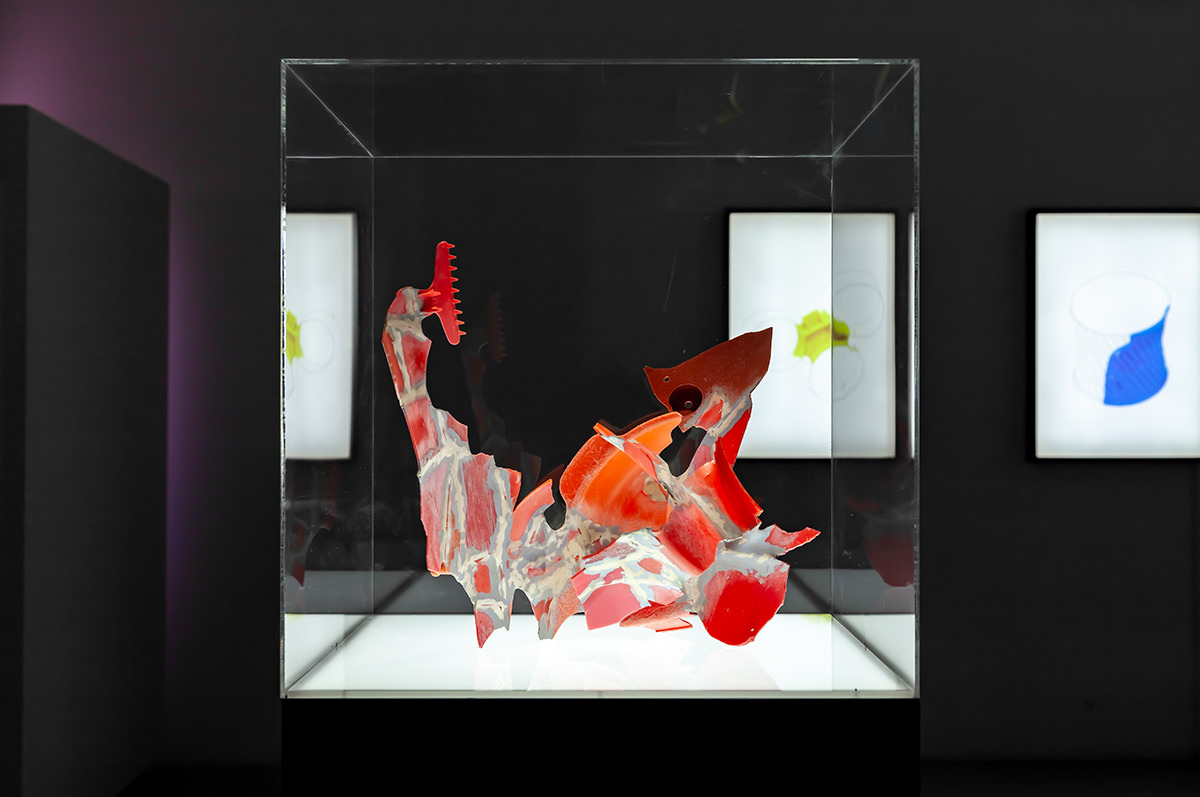 A series of sculptures consisting of plastic fragments collected at beaches. The artist endeavored to repair the objects in imitation of archaeological methods of restoration.
However, the shapes of the restored objects appear distorted because the plastic pieces were washed ashore from different countries by a sea current. This peculiar distortion might evoke the relationship between human beings and plastic. Anzai imagines how our everyday life might be restored tens of thousands of years later, if an archaeologist in the post-apocalyptic future were to research excavated plastic pieces.

These objects are cement casts of plastic covers for everyday objects.
The plastic shell, which is often used for carded packaging, has an abstract form of the product it contains and protects. This is like the transparent slough of a snake which consists of only surface without mass. The negative space of the shell is converted to a solid mass by casting it. 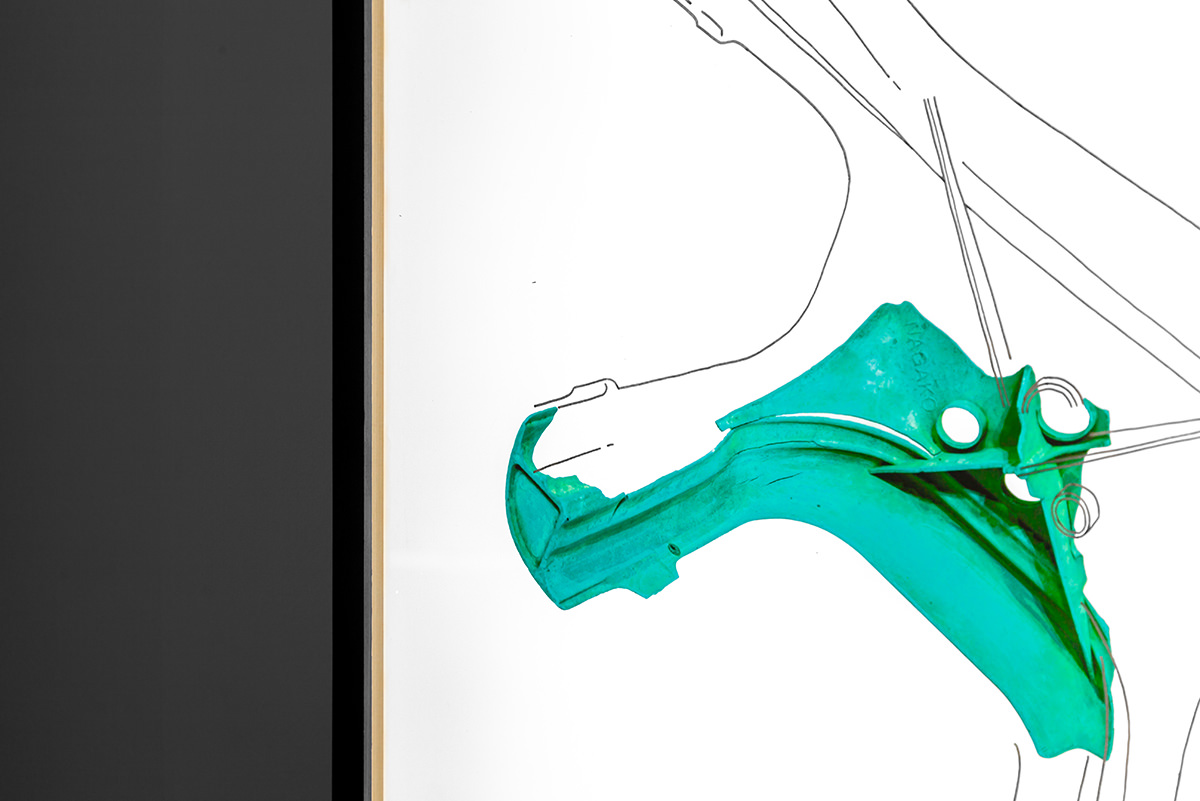 This work is composed of a drawing and a photo of a plastic fragment found at a beach. The drawing is the artist's imagination of what the plastic fragment was intended to be a part of.
The title, OOPArts, is an abbreviation of "out of place artifact.” The imaginary drawing of the objects, as well as plastic pieces conveyed by a sea current, can be considered OOPArts. 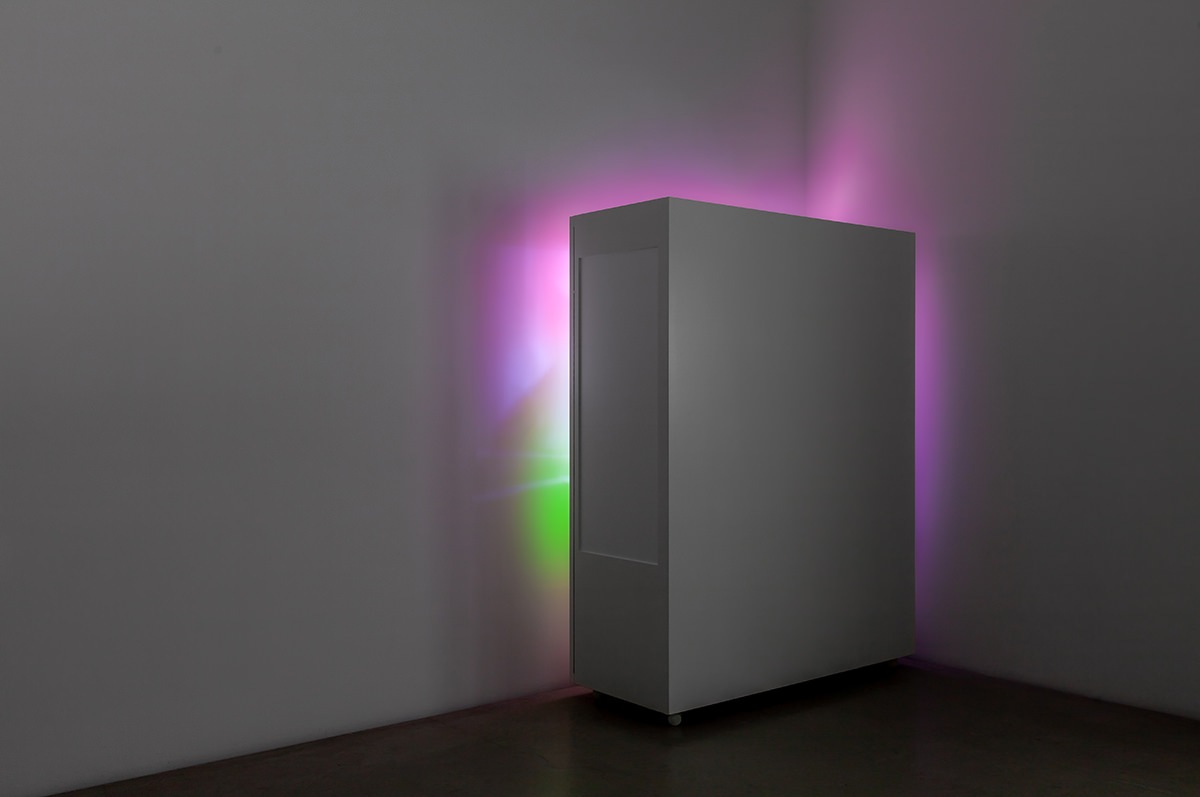 Multicolored light can be seen coming from the slight space between a wall and a glass display case. The light is reflected from trash which the artist has gathered at a seashore in Ishikawa and packed inside the glass display case.
The trash exists inside of the vitrine but its existence is manifest only as a vague reflection because the vitrine faces the wall. This situation is similar to our attitude toward a social problem in everyday life. Even if we know seriousness of a problem, it is difficult to galvanize ourselves into action to solve it.